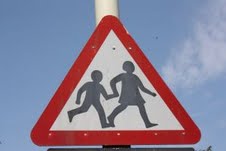 I had no idea that teenagers were in possession of special powers that enabled them to walk in front of cars and be invincible.

Someone better tell all those kids then …

Despite my attempt at the kind of sarcasm teenagers do so well, I do feel strongly about this and am going to rant a little, especially as I have had a teenager who has most likely been guilty of this, and another who is probably doing the same.

We all probably thought nothing could touch us at that age and I remember the need to fit in and not be the boring one who followed all the rules. But seeing it from the other side and from a few years later (quite a few, actually) it doesn’t look quite so cool. On one occasion I witnessed two teenagers continue to walk on the road with no intention of moving resulting in the oncoming car having to slow down and sound the horn, still they meandered on, not a care in the world. I bet their parents would be annoyed to see that. I know I would.

But is my son doing the same thing? That’s what plays on my mind –  you can instil all the road sense possible into a child but what can you do when they are at the mercy of their peers and need to be a part of things? They sometimes cross the road in packs and there is no choice for the driver but to stop. I have seen kids take chances on roads that are quite frankly alarming. I have found myself shaking my head and even tutting disapprovingly at this but what can I do but cross my fingers and hope they stay safe and eventually cross the road with more sense? The alternative is to approach the child and discuss my concerns, as I saw a woman do recently when she asked the kids to stop running on and off the road as they were making her nervous. That wouldn’t be possible all the time and would they even listen? I know that not all schoolchildren do this but there are enough of them that do to make it a worry.