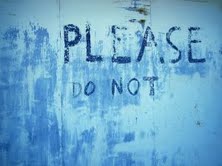 Children have never been very good at listening to their elders, but they have never failed to imitate them. James Baldwin

If this quote is true, then what we do is even more important than what we say. I was out for lunch this week with a friend who works with difficult children in schools. The conversation turned to the sometimes less than totally positive impact parents have on their children. She has the  type of world view that means she views her own experiences and chooses either to focus on the positive ones, or on the lessons learned from the less than positive ones. As a psychologist, she knows that it might help her to understand the past, but it still won’t change it, so this way, memory works for her positively in all her experiences.

And so we got chatting about what she called “sayings to live your life by” – the type of distilled belief that your parents shared with you or others that affected how they lived their lives. Things like, “money doesn’t grow on trees” and “what goes around comes around” or “it takes one to know one.” My friend said that such sayings become values, and for that reason, as adults we need to check that they are still valid and useful; otherwise they are going to impact every relationship we have.

It got me thinking. About what sayings I believed about relationships, children, love, money and life in general. So I tried a little exercise I’d come across some time before. I took my journal out, used some of these headings, and then wrote under them: “I should.”  Then without editing them in any way (as I needed to see what really came up), I just started writing quickly about things I thought I should do, or ways I should behave or think. A few minutes later and I was surprised to see I had 40-odd beliefs to examine further.

For each belief I then asked, “Why?”

This brought up an interesting range of responses, some of which were common sense or something I’d learned over my life, but often I heard someone else’s voice saying it first. Often it was a parent, but sometimes it was a teacher, a peer or a friend. When I looked at the why’s of a belief, I could see that some of them were less than totally useful, so I then asked myself if I still thought this was a belief I should hold on to. If it wasn’t, I found a better one to replace it with.

Now when the initial saying comes to my mind, I replace it with the new one. I know from experience that this process of replacing one thought with another changes my beliefs. My children are now grown up, so I can do nothing about my past influence, or lack of it, but for the past number of years, I have tried to guide them with some sayings for life that are mine, and they can try them on for size. They include:

It’s an exercise worth doing, to flush out the less than totally helpful sayings you are unconsciously passing on to your children or allowing to influence your relationships.

What one saying would you add to the list that could have a positive effect on others?