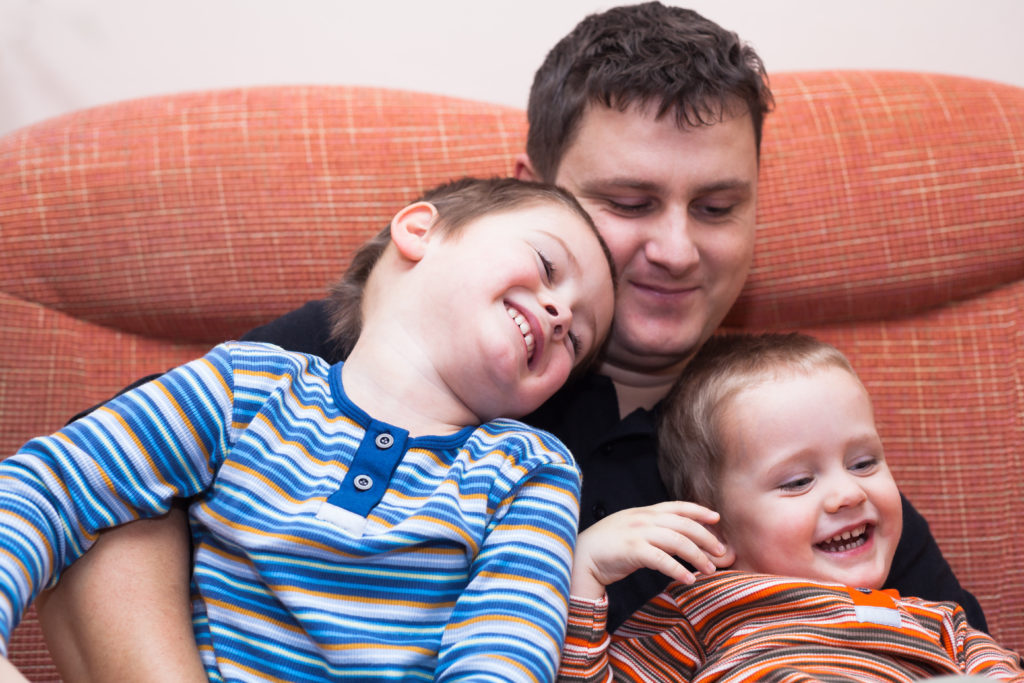 Recently I asked my 8 year old son his thoughts on what makes a good dad. “The best daddies are the bald daddies,” was his reply. This was a strong affirmation of his continuing affection for me as his dad, coupled with an encouraging acceptance of my advancing hairline. It was also a reminder that for many children (but sadly not all children), the best dad in the world is their own dad.

Parenthood, I believe, takes everyone by surprise to some extent. Research on fatherhood by Professor Tina Miller at Oxford Brookes University found that most parents-to-be greatly underestimated the impact that the birth of their first child would have on their lives. What is often referred to as a ‘bomb being dropped into your relationship’, the birth of a first child changes everything for most people. Previous calm and relative sanity can quickly vanish, especially in the early days, and it can take some considerable time before any pretence at normality resumes.

In the counselling room, many couples identify the birth of their first child as the time when problematic patterns first emerged. Deep resentments over the share of childcare and housework, differing expectations over the amount of sex they should have, and fundamental disagreements over how to raise children are just some of the issues that lead to significant conflict for many couples over time.

Expectations of prospective parents in relation to the split of childcare duties have also been found to be largely out of kilter with reality. Professor Tina Miller’s research on fatherhood found that  before the birth of a first child, many parents-to-be are now likely to believe that there will be a 50:50 split of parenting duties once their new child arrives. The reality, however, tells a somewhat different story, with the vast majority of men returning to work either immediately or very shortly after a period of parental leave. Traditional roles of the man being the main wage earner and the woman being the primary carer remains by far the most common arrangement, despite the wishes and hopes of many.

I was fortunate to hear Gideon Burrows speak recently.  Author of Men Can Do It – The Real Reason Dads Don’t Do Childcare, Burrows actually walked the talk and equally split the care of his three children with his wife. With this experience under his belt, he knows first-hand both the rewards and the stresses of frontline parenthood, and offers the following advice to men who wish to be more supportive to their partners:

The Year of the Dad, supported by the Scottish Government, Fathers Network Scotland and many others, is both an opportunity to celebrate the positive impact that men can make on the lives of their children and families, and a direct challenge to the significant minority of men whose impact is far from positive. Organisations such as Scottish Women’s Aid are still desperately needed because a significant minority of men are abusive, controlling and violent. Men as well as women need to directly challenge any man who believes that threatening behaviour against women, children or indeed other men is acceptable. It is not.

Beyond this very concerning minority are the many thousands of men who wish to do more but are unsure exactly how. Support for new dads, especially those who may have separated from their partner and who wish to remain in close contact with their children, is greatly needed. Dads Rock, a charity which supports dads to learn how to play with and look after their children, is a wonderful start, however it only operates within the Edinburgh area. More initiatives like this are needed if men are to fully play their part in ensuring that Scotland really is the best country in the world to grow up in.

For me, being a dad is the best and most important job in the world. My son means the world to me and the care that I have for him extends to others, especially those for whom childhood is far from ideal. Men have such a vital role to play in the lives of our children, and if understood in the right context, the Year of the Dad will hopefully lead to many others responding to the challenge.

To find out more about Relationships Scotland visit their website at www.relationships-scotland.org.uk or phone 0845 119 2020

To find out more about the Year of the Dad, visit www.yearofthedad.org/