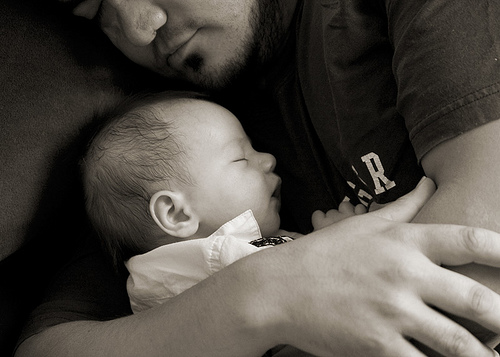 MP Matthew Hancock recently hit the deadlines when he announced that he plans to take two months’ paternity leave following the birth of his third child this summer.

The youngest Tory minister in the Department for Business, Innovation and Skills, Mr Hancock readily admitted that his privileged position as an MP, and the happy coincidence of the birth being at the start of Parliament’s long summer break , made it possible for him to make a choice that is not often open to other men.

But has the time come for a change in parental leave choices? By October 2015, a new system of maternity allowance should be in place- this ‘flexible parental leave’ will give both mothers and fathers the same state support during the first year of their child’s life. Mothers will be able to return to work after just two weeks, should they wish to, and then the father would be entitled to take over the rest of the ‘maternity’ leave. The system may be introduced earlier, but there remains considerable opposition from the business community, many of whom believe that flexible leave places too high a burden on small businesses, and will in fact be bad for the economy.

It’s not clear however if UK employers are ready for the change. While many parents in the UK already have the right to ask for a change in working hours, employers can easily refuse, if the employee’s role and the demands of the business make it impossible or if the change will be detrimental to the business. And the perception seems to remain that requesting flexible working is not ‘the done thing’ – in a recent survey of 1,000 managers by the Institute of Leadership and Management, more than a fifth of those surveyed believed working flexibly would be ‘career limiting’, while almost a third had heard colleagues make derogatory comments about other employees who worked flexibly.

Will extended paternity leave even be affordable for most families in the UK? The Department for Business, Innovation and Skills itself has estimated that fewer that 13,500 couples would find it financially beneficial to switch the allowance from mother to father.

Aside from the financial argument, are new dads ready to take on this responsibility? Here at Relationships Scotland we’ve been tweeting our followers to ask them this, and the replies were, for the most part, very favourable. Stewart tweeted to say he was in favour of a “more flexible system where parents can decide together what is best and split the time off to spend with the baby”, while Fraser commented that he and his partner “definitely needed those first two weeks off, not sure how we’d have coped if my wife was home alone”. On the question of whether mothers would be happy to return to work and leave their partners in charge, Janis replied “I’m giving up two months of maternity leave so my boyfriend can take time off. I’m not looking forward to going back but I think it will be good for him and our baby to have time together .”

Janis’s partner Paul commented that the ideal would be for each parent to have a full 12 months each, not split between the two, “My two week paternity leave in April after the birth of my first child was longer then my father got when I was born. Should I be grateful? To be honest I thought so initially but then I realised that all across Europe, parent/child bonding and the importance placed upon those early years allows parents to take up to twelve months each, not split.“

On this issue, how does the UK compare with other countries? Well, it certainly lags behind some of its continental neighbours. Sweden for example has a flexible parental leave system. Either working parent can take and share an entitlement of 16 months paid leave per child, at 80 percent of salary, the cost of which is divided between employer and the state.

But perhaps predictably, one of the worst countries for providing leave to either mother or father is the USA. While some states and American employers do provide leave, and some even provide leave on generous terms, the vast number of US employees, especially those working part-time and for small businesses, are still entitled to no leave at all.

Should we be grateful then that we’re not as bad as the eight countries in the world who offer no leave at all? Or should we demand from our elected representatives the opportunity to share quality time with our new small people? After all, if it’s ok for them, shouldn’t it be ok for us?

In closing, we’ll leave the last word to new dad Paul – although he managed only two weeks of paternity leave, he remained ”happy to have had a time share in my offspring.”

“The ability of parents to be able to share parental leave is great, as larger companies can easily absorb this loss of staff. I work for a large bank who is continually ahead of legislation; however the bottom line for many families comes down to money and personal circumstances. I know of one couple who had a hard time explaining to the employer that they were entitled to the parental leave. Obviously there is still a need for education about leave, and it’s going to take time, and brave souls to lead the way and ‘normalise’ the swapping of leave.

There can still be a stigma around men wanting to take time off work, and also the concern that they will miss promotion/pay increases. I guess this is also an issue for women, although generally this hasn’t been something to consider until this legislation came in.

We know kids have better outcomes if they have strong relationships with both parents, so it’s a no brainer that we want to encourage flexibility and help Dads spend more time with their kids. Families just need to be supported financially and I wonder if we as a society expect too much? It can be hard to find the right balance.

It will be interesting to see how this develops and changes relationships.”

See the EHRC for more info on requesting flexible working