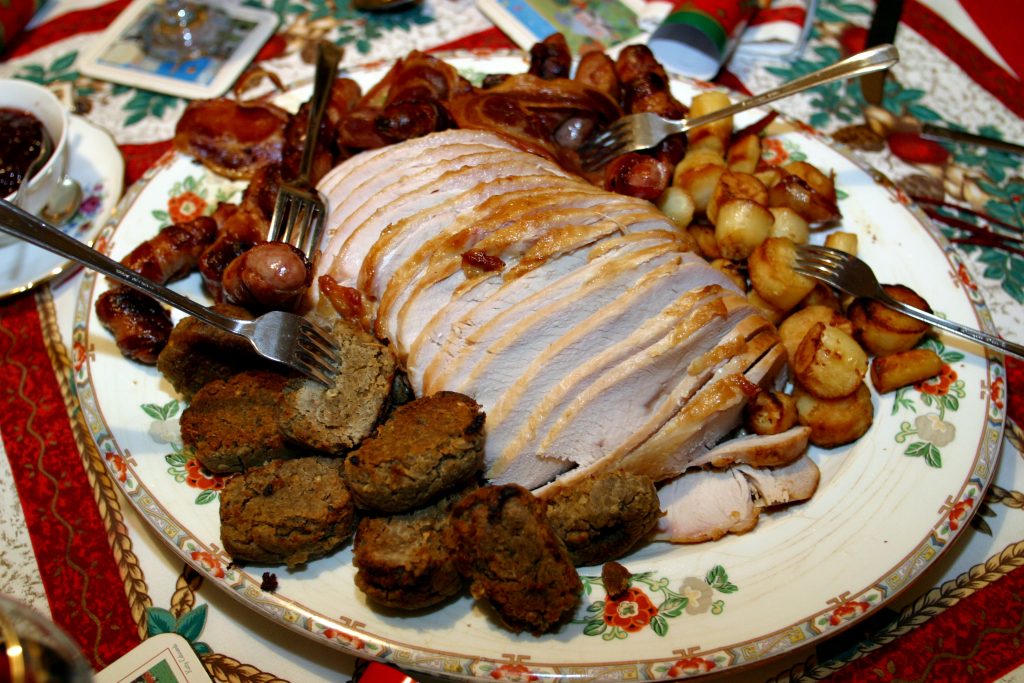 It starts in our house with me asking hubby to go up the loft for the tree and decorations, usually about September to give him plenty of time to say he’ll do it at the weekend and then never do it. Then, the night of the tree going up, in my haphazard and non-creative fashion, I will throw up the tree and drape lights here and there. This is usually all rectified by my very creative and very particular other half when the tree becomes a “project”.

After I’ve stood on the fairy lights three times and smashed a bauble or two I am usually sent to a corner of the couch and asked to stay put, which usually suits me and my freshly  poured drink just fine. Once it’s all done and he’s fixed the bits that I have pointed out are not even – I can be particular too especially when it comes to sparkly – we sit and ooh and aah and I congratulate myself on a job well done.

Christmas morning I love the getting up and the opening of the presents and even though I am one son down – he will be starting his own traditions no doubt –  it is a great time. Although I have no one in my house who believes in Santa (well, apart from me obviously) it’s still a special day. We go to church and celebrate there. That has always been part of Christmas Day for me, but no matter who we are and what we do, we should feel lucky as there are those out there who are not.

After church there is usually a chocolate lunch to sustain us until dinner, which we hope will be on time, and the gathering of the presents, spare plates, cutlery and the odd chair (and I do mean odd) to take to the house hosting dinner and to start another round of opening.

Every year my sister and I do the Christmas dinner, no matter whose house we have it in. The first few years were a wine-induced farce and the dinner would be deposited on the table a while after the – somewhat optimistic – estimated time of arrival.  This would be due to hard carrots, soft potatoes and the world’s biggest pot of soup that took hours to heat.

A few years and a few more children later, the wine consumption decreased and last year we actually managed to produce a dinner that was not only the right consistency but was actually still hot when it reached the table. This wasn’t helped at all by the men waiting round the table unconvincingly shouting random offers of help at the wrong moments or indeed the man who thought it was amusing to cry out “Where’s my dinner/soup/drink?” every 10 minutes. (You know who you are).

Boxing Day for us is another Christmas Day. We spend it with my mum, but thankfully my sister and I don’t do the cooking and tend to catch up on all the wine we missed while getting dinner to the table on time the day before!