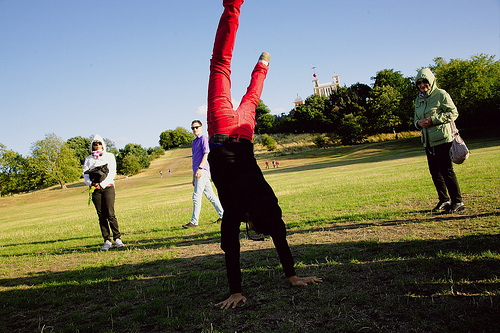 Are you one of the thousands of guilt-tripped parents in the UK reading stories in the press berating you for either working too much and stunting your child’s emotional and intellectual development?  Or for taking time off work to raise your children but then having the temerity to claim available benefits (to which you’ve contributed by paying a variety of taxes for many years?) It can sometimes seem as if being parent is an inevitable succession of bad decisions and regrets.

So I decided some years ago to, for the most part, ignore what the self-appointed experts had to say on the subject of my parenting skills, and just do the best I could. However, a recent survey crept under the wire and into my brain, and got me thinking. Research by Huggies of 2000 parents, with older children, found that 63 per cent wish they had done more activities with their child when they were young. Among the things they regretted most were spending too much time at work, not taking enough photographs to capture precious memories, and not playing enough with their kids.

Now, having to work too hard is something we can’t always control, and I can’t take a photo to save myself, but the question of play time keeps running round my head. On any given day, three out of four of the occupants of this household will have some form of electronic device in their hand, whether laptop, mobile phone or games console. And the worst culprit – yes, you’ve guessed it, is me. I’m the Twitter and Facebook addict. I genuinely feel as if I can’t live without my news feed, and can probably more easily name some European heads of state than I can my children’s current circle of friends. Shame on me.

Even settling down together to watch TV is a thing of the past. The kids stream what they want to watch straight to their devices, I’m working my way through Game of Thrones, and the Mr has taken to watching re-runs of Yes Minister because politics in the real world is “too depressing”. Part of me wishes it was still the 1970’s. Not for the casual racism, bad hairdos and industrial action, but for the complete lack of choice we had in television programmes. If Doctor Who was on TV on Saturday night, you could bet every single child in your class was watching it too, along with their parents. Families around the country would have squeezed onto mustard yellow sofas to watch the Generation Game together, all trying desperately to remember what was on the conveyor belt. That was at least one thing we all had in common.

And so I wonder…as my children have ceased to bother me with nagging requests to take them to the park (apparently, roundabouts are not cool when you’re 14), and we’re all so busy logging on and tuning out, or attending sports clubs rather than climbing trees, do I in fact play with my kids any more? And would they appreciate it if I tried to? Given that they are no longer needy toddlers, would there in fact be any advantage to them in my spending more play time with them ( except of course for reducing parental guilt?) A quick, unscientific (but entirely justified) trawl of the Internet provides the answers. The amount of research is staggering, and the results are conclusive. Among other things:

Leaving the Internet behind and returning to the real world, a short straw poll was conducted, the results of which were that 100% of the participants (otherwise known as daughter number 1 and daughter number 2) wouldn’t mind if they had to ‘just hang out’ with me a little bit more. However, some rules must apply. What rules? Apparently, I must buy some new clothes, there must be no public displays of affection or use of cute baby nicknames, and there must never be any sort of dancing or parental attempts to understand or speak in their secret languages.